To celebrate the 20th anniversary of their multi-platinum album Dizzy Up The Girl, the Goo Goo Dolls decided that there was no better way than to set out on a cross country tour and play the album in its entirety to the fans who have been supporting the band since their formation in Buffalo, NY back in 1986.

With no support act, it was an evening of nothing but The Goo Goo Dolls. Though the show was advertised the start at 8pm, the band did not get started until 845pm. With the stage set up only consisting of the band, their instruments and framed image of the album cover making up the back drop, the band performed two sets.

Set one was Dizzy Up The Girl – with popular songs “Slide”, “Broadway” and “Iris” getting they greatest response. During the song “Black Balloon”, large balloons filled the theater and they were bouncing everywhere throughout the crowd.

After a brief intermission, the band performed a second set consisted of singles and hits that spanned the bands history. 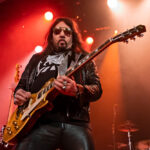