Many long time or lifelong fans were waiting patiently in the long line that made its way down the street from Seattle’s historic Neptune Theater. Some in their favorite Ace Frehley shirts, and some in his signature Space Man makeup.

Tonight’s performance had no support act. As showtime drew near and the house lights went low, “Fractured Mirror” from Frehley’s 1978 self-titled solo album was played over the sound system as the band members of Frehley’s band made their way onto the stage.

Frehley and bandmates performed many classic KISS songs, that were performed and written by Frehley. Many in the audience were very familiar with the selection of material the band had performed and sang along as the band performed fan favorites such as “Parasite”, “Save Your Love”, “Rip It Out”, “Shock Me” and “Rocket Ride”.

The show was the first night of a West Coast tour for the band. It was also great two hours of great nostalgic rock and roll. 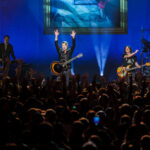 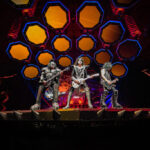